Using Scratch, the competing programmers worked in pairs to demonstrate a pre-prepared maze game and work on an unseen challenge which involved designing and developing a stopwatch. Twenty judges were involved in the group stages, each pair of judges selecting a winning team to go through to the final for each of the two tasks. Once again the standard this year was very high throughout – some of the games were amazing and there were many exciting and creative stopwatches produced in a relatively short period of time.

The finals were held after a well-earned pizza break. These took place in a lecture theatre in front of a panel of three judges and all the other competitors, teachers and sponsors! As always the standard of these presentations was impressive, proving that a presenter’s age and size has nothing to do with whether they can engage their audience!

Competition was fierce in the secondary age group, but once again Wymondham High dominated the maze game taking all three places, with Alistair Johnson and Peter Rose taking first prize, William Singleton and Mohammed Hussain second, and Kacper Burczyk and Daniel Gukas third. The secondary stopwatch challenge was a much more open contest, the winners were, first, Ethan and Bobby from Diss High, second, James Livesey and Hugo Dodd from Taverham Hall, and third, Jack Featherstone and Harvey Davis from Fakenham Academy. The judges also awarded the prize for most promising boy pair to Thomas Harmer-Borely and Dylan Burge from Springwood High, and one for the most promising girl pair to Lillianne Fenn and Summer Hird-Lewis from the Iceni Academy Methwold.

The primary finals were a lot of fun with enthusiastic audience participation. The software was impressive as were the Steve Jobs standard presentation skills! Sophie and Frankie Lorimer from Tacolneston retained their first place in the maze game competition, but were very closely followed by Emilia Butcher-Marroqui and Eleanor Phillips from Colman Junior who came second, and Aniya and Maanvii from Bancroft’s Prep who came third. The stopwatch software demonstrated both flair and programming skills, with Toni and Josie from Bancroft Prep eventually being crowned winners. Second were Sonny Pryor-Hadley and Ben Coast from Aldborough, and third were Charlotte Read and Tabitha Alberry from Taverham Hall. Alex Tutt and Stella Mitor from Colman Junior received the prize for most promising girl pair, while the most promising boy pair went to Ben Smith and Zack Montague from Little Melton.

The event was generously sponsored by Neon Tribe, Purple Tuesday, Abellio Greater Anglia, the BCS, fxhome (HITFILM), Aviva, Tesco and the UEA. Our thanks go to them all! Representatives from these companies also helped out with the judging and of course, with presenting the prizes. The majority of the judges were UEA computing faculty and PhD students supported by a few of the visiting teachers.

A good time was had by all. Matt Lewis representing Aviva and also acting as a judge was enthusiastic saying, “There was a real buzz of activity in the labs and a sense that everyone was having a good time whilst learning”. The mood was best summed up by one of the Colman Junior participants who exclaimed, “That was an immense day!”

It is always inspirational to see so many youngsters having such fun creating software. It is particularly exciting to see the way in which both girls and boys are getting involved especially in the primary age group. The secondary age group prize winners may have been dominated by males, but five out of the six main prizes in the primary competitions were awarded to female pairs. Here come the girls and not a minute too early!

Thank you to all our sponsors! 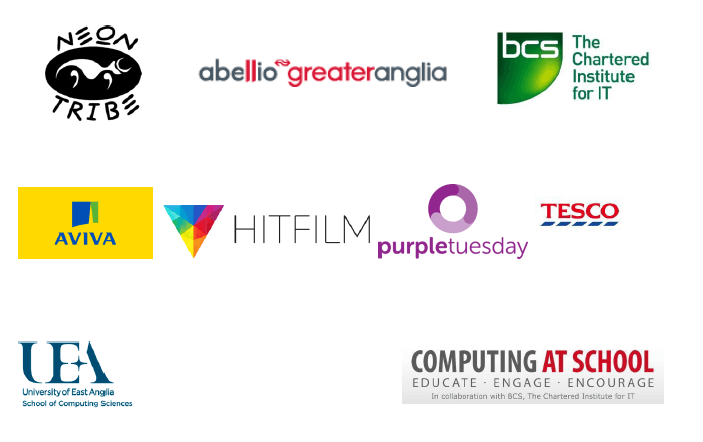 July 1st, 2016|Uncategorized|Comments Off on Cas Scratch Off Competition